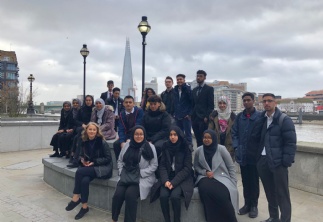 20 Sixth Form students took part in the annual City of London School Model United Nations conference to compete against some of the best grammar and independent schools from in and around London.

We are delighted to inform you that Adnan Zahid from Year 12 won 'Best Delegate' award for his contribution on the Security Council where he ably represented the views of Russia with regards to the ongoing Syrian Civil war. In addition, Andrei, Jaival, Sahas and Ziad managed to persuade their committee to pass a number of clauses in the Eco Soc Committee.

All the students represented the school with distinction and were pleasure to work with. It must be noted that the students were given a very short time to prepare and were exceptional in their efforts.

There was also an opening speech from Rosemary Thomas OBE who has worked in the Foreign and Commonwealth Office for over 28 years covering a number of roles such as Ambassador to Belarus, Deputy Director for Eastern Europe, Head of the War Crimes and First secretary for Elimination. She gave an overview of her personal experiences in places like Afghanistan, along with her opinions and thoughts on working at the FCO and how the various roles she had covered were enriching, rewarding yet challenging. The students appreciated the insight she offered, and were better able to appreciate the role of a diplomat.

Further photos can be viewed on our blog.