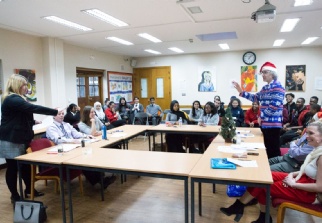 This year's debate was organised  by the Upper School Debating Society and the motion was: This House wishes it could be Christmas everyday.

A wonderfully lively debate witnessed by staff and students alike debate the implications of it being Christmas everyday. Mr Waxman opened the debate with his customary enthusiasm and vigour, arguing that Christmas was very much about giving to others, and helping. Ms Hunter raised the very many impracticalities this would bring about, and how eventually it could become a little meaningless. Mr Das attempted to sell the health benefits of Christmas, stating this would enable people to get their 5 a day! While Mr Senior implored the masses to ignore the false promises of the proposition, stating that Christmas would be expensive and how it would become a constant stream of unwanted guests. After several tense but well humoured exchanges the opposition dubbed 'grinches and scrooges' by the effervescent Ms Williams saw their valiants efforts fall short as the wit and style of the proposition was rewarded with a resounding victory, but not before Ms Regan asked with a wry smile if indeed this was such a good idea why the school had not made it a policy!

Thank you to all the staff for giving up their lunch to debate.

Click here to see further photos of the event.