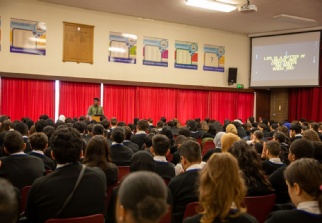 Our Year 9 students took part in a talk about Amani.

Amani has been commissioned by Brent to deliver assemblies in Brent Schools. His work has won awards and has featured on London Tonight. His film about his journey to being stabbed got 1 million views within four days and has won awards.

He spoke to school staff at the Brent DSL network meeting and found him to be real inspiration. He shared how he had been successful at primary school but struggled with the transition from primary to secondary and ended up expelled in Year 9 and distanced himself from his family to the point he entered the care system. He was stabbed and fortunately survived and has turned his life around but instead of focusing on knife crime he is focused on when he became disengaged with school and the importance of education.

More information can be found on the website https://www.aviard.co.uk/amaniprogramme/