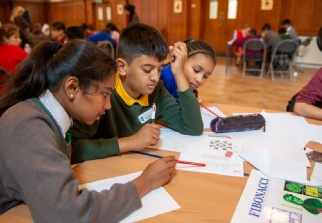 On Wednesday 26 June, the Maths department held its annual Primary Maths Mash Up. Top mathematicians in Year 5 from Kingsbury Green, Roe Green, Oliver Goldsmith, St Robert Southwell and Fryent Park were invited to Kingsbury High School to work on various mathematical challenges. They were put into 5 teams, each named after a notable mathematician; Fibonacci, Einstein, Newton, Pascal and Pythagoras and led by year 12 mathematics students.

The event kicked off with a captivating maths magic trick from Miss Brobbe which incited the curiosity and excitement of the students before the main challenges. This excitement was maintained throughout the 3 hours of intense mathematics challenges as the year fives worked in mixed school teams with fellow mathematicians they had met for the first time. There was a delightful atmosphere in K hall as all participants, including the audience, beamed with eagerness and excitement to work on challenges such as Make a Number, Speed test and Cross Number.

Throughout the event, our year 12 volunteers Arezo, Ajanth, Afi, Khushi, Jaival, Monica, Rowan, Samra, Suliaman, Sujayan, Vaishnavi, Vamini and Varshneyan were a true credit to the school; they impressed the visiting primary schools so much that the teachers enquired about inviting them to their schools to deliver maths workshops!

Further photos of the day can be viewed on our blog.