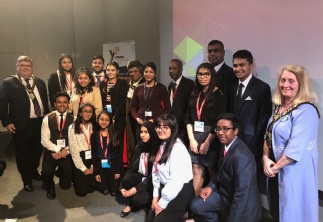 On Wednesday 1 May, the Sixth Form Young Enterprise Team were up against six other teams from top independent schools and one other state school.

Only one team could win a place to go through to the London Final in June. Hosted at the University of West London in Ealing, the teams needed to perform exceptionally well as there were no weak links among the competition: every team had a great stall, engaging presentation and interviewed like seasoned professionals. However, ‘Iceberg’, the KHS team, had an amazing product: a fun, educational card game for the classroom to encourage Years 5-7 to consider making better choices when it comes to handling fear, family, pressure, and insecurities. The judges commented that Iceberg’s product was an original idea that they had not seen before. Iceberg beat all three teams from North London Collegiate Girls School, both teams from Norwood College and the team from Latymer Upper School. There was a lot of whooping and cheering when their team name was announced as Best Company: the winners. They now need to focus on AS exams or completing BTEC coursework, after which they will respond to the judges feedback and go for it again on 3 June at HSBC in Canary Wharf. If there is any member of staff interested in supporting Young Enterprise next academic year, get in touch with the YE lead this year, Michael Senior. Together we can support another team 2019-2020: it’s a great sixth form competition that dates back 60 years and KHS has had an amazing record of success...and watching students progress through the various levels of the competition is a wonderful experience.