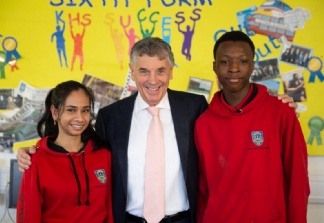 David was instrumental in setting up the entire Premier League which has become such a successful global phenomenon as well as being key to running Arsenal FC for many, many years. He appointed Arsene Wenger as well as many footballing superstars who joined Arsenal, though he tried to persuade Ronaldo to join, only to be outbid by Manchester United. The talk was not just about football: there were lessons about being the best you can be as well as the need to 'stick your neck out' by taking a risk in life. Students were also advised about how to be successful when interviewed. David was delighted to have visited Kingsbury High School Sixth Form and was extremely impressed by the facilities and students.

David was joined by the New York Times sports reporter Tariq Panja who is a former KHS student.

All the photos from the talk can be viewed on our  school blog.