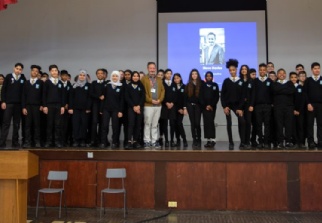 Our Year 8 students had the opportunity to listen to Steve Davies during their pastoral period on Friday 6 March.  A talk made possible by Speakers for School.

Steve is a lawyer and Chief Executive of the Advertising Producers Association, the trade body for production companies- including visual effects, editing, music and sound design companies creating commercials.
Steve was a partner in a law firm in central London, then worked in sport and TV- principally boxing and rugby- before joining the APA as Chief Executive in 2000. Steve explained the structure of the advertising and commercials production industry and the different roles within it, so students with an interest in advertising/the media could get a better sense of what might suit them.