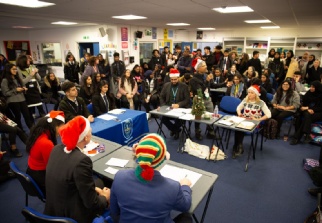 For the third year running, the KHS Sixth Form Debating Society organised the Annual Christmas Staff Debate, with the motion: This House would arrest Santa for breaking into people’s homes.

Students swarmed into the Sixth Form Study Room to witness this fiery, spirited debate. As the first speaker, Mr Shaheen defined the motion with wit and clarity, proposing that Santa is evidently invading people’s privacy, and this cannot be dismissed as harmless in a post-’MeToo’ world.  In response, Ms Persaud argued eloquently that Santa lacks the criminal intent to harm people, and is a welcome visitor in everyone’s homes. Mr Das fired back that our consent to Santa’s presence is implied, before pointing out Santa’s involvement in animal cruelty by overworking his reindeers on a cold Christmas Eve.  In his first debate as the Headteacher, Mr Thomas declared that arresting Santa is a drain on police resources, especially during a time of austerity for the UK. After Mr Moffat’s assertion that such a motion lacked any evidence or reason to appear in court (and dazzled the spectators with a song to finish!), Ms Williams concluded the debate by passionately arguing that Santa’s habitual housebreaking is a clear violation of our human rights.

In the middle of the debate, many students provided impressive questions and objections to both teams.

With a cheering competition among the floor, the opposition was proclaimed victorious.  The debate ended with a sense of sportsmanship, good humour, and respect all around.

‘This debate was really enjoyable,’ commented a student who attended.  ‘It was great to see the teachers who we’ve known all these years argue and discuss such a contentious topic together in this way.  This was a shining example of good debating.’

Thank you and well done to all the staff who took part!