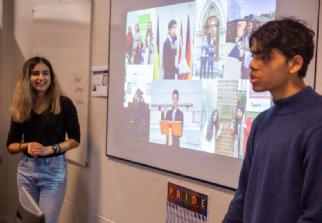 An important element of the workshop was to introduce students to the  British    Parliamentary  format for debating.  Sara Dehvari, a former Head Girl at Kingsbury High School, and  Abhiram Bibekar who study History and Physics respectively at Cambridge University  highlighted the merits of debating and how it helped them develop into critical thinkers. There were light-hearted debates on whether Jaffa cakes were cakes or biscuits and more serious topics like if the consumption of meat should be limited. The event culminated in a lively formal debate on whether social media should be banned - Yusuf Yusuf from Year 7 as the Prime Minister proposed the motion to ban social media stating it would lead to a fall in cyberbullying and was opposed by   Dhruvshaal  Gopal from Year 8 acting as the Leader of the Opposition who argued it would limit our means of communication.

Click here to see further photos of the  event.