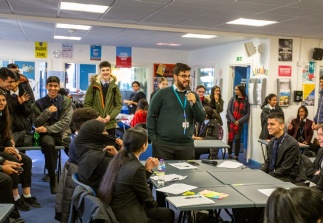 With the upcoming General Election our motion was a topical one, 'The House would make voting compulsory' arguing for the proposition were Nouh, Umayma and Priya - while on the opposition we had Bill, Devvan and Amal.

In lively debate the proposition argued that compulsory voting would ensure we had governments  that had a greater degree of legitimacy and a fair representation of the people stating that it has worked in Australia and other nations. Whereas the opposition refused to buckle arguing that voting was a civic right not a duty and that it would lay the foundation to give to rise an authoritarian regime. In a packed study room the motion was passed for the proposition.

Click here to view further photos of the debating session.